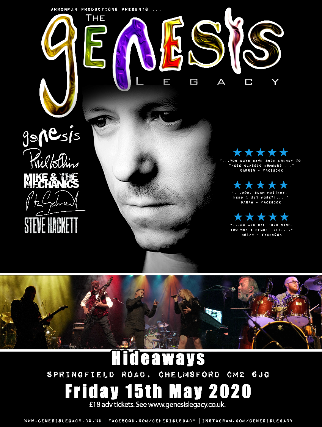 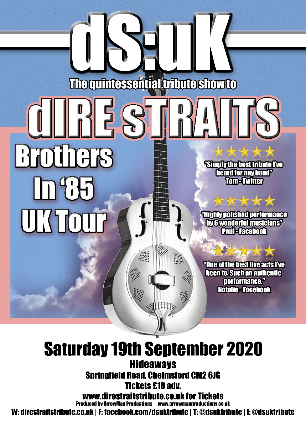 During the 80’s and 90’s, Dire Straits were one of the biggest music brands and concert touring bands in the world. Still today, Mark Knopfler remains one of the most beloved guitarists in modern Rock.
Their biggest album, Brothers in Arms, released in 1985 still sits in the top 10 of the best selling albums in chart history.
“dS:uK…in tribute to Dire Straits” began touring in 2016 and have quickly become regarded as *the* quintessential tribute band among Dire Straits fans with their incredible attention to musical and sonic detail. To say that “dS:uK” sound like Dire Straits is an understatement.
Their 2020 “Brothers in 85” tour pays tribute to the worldwide Brothers in Arms tour, with the band bringing fans the ultimate 1985 Dire Straits experience and all of those classic songs that you want to hear.
Here comes Johnny singing oldies goldies…. it’ll truly give you a shiver in the dark!
Don’t miss it!

This is a standing venue but seats can be arranged via request. Luck and Neat are coming to town for a night of Pure UK Garage and 90's House.

After the success and response to our last Garage night with The Artful Dodger we thought we'd treat you to these great legends.

On stage at at 11pm til midnight, plus great supporting DJ's including guest DJs. 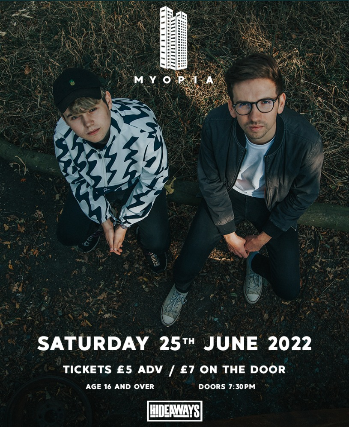 
Very few people seem to understand the concept of ‘Living on Sixes’. They often strive for perfection and can’t accept it when things inevitably go wrong. Something or someone is always to blame, rather than living with life’s flaws. It’s okay to be living at 6/10 because perfection, as much as we want it, doesn’t exist. We make the best of what we have.

That’s the theme behind the album. It was written from start to finish over a pretty damaging experience in my life that made me come out the other side all the better for it. You can’t have good times without bad times and people seem to forget that.

While we consider ourselves to be a progressive rock band, no song on the album is the same. Everything has been made to sound original and exciting and that’s always been the way I planned it.

I started writing Living on Sixes in 2017 and it’s finally ready. So don’t overthink it, just enjoy. We are pleased to announce the band are back by popular demand.

National Tribute Award Finalists, A Band Called Malice has taken the tribute world by storm in their quest to become the number one choice tribute-act to The Jam. The talented trio are the real deal and guarantee to take you back to ‘When You’re Young,” with an evening of single releases & album tracks from The Jams early Fire & Skill years, through to their very last release.

As Jam fans themselves, A Band Called Malice will not disappoint and guarantees a show full of high octane energy, angst, aggression, passion and soul of their idols.

The band has certainly caught the imagination of a lot of people over the last year, resulting in official endorsement from Lambretta Clothing of Carnaby Street, a National Tribute Award nomination, bookings at prestigious venues and events across the land and no less than 1/4 of a million hits on the video of our live street performance outside the Lambretta Store on Carnaby street.
See what people say about the band by checking out our reviews on our Facebook page or see the video footage for yourself...... better still, come and check out one of our gigs & be sure to book yourself a place ‘In the Crowd!’


With support from Acoustic Malice. 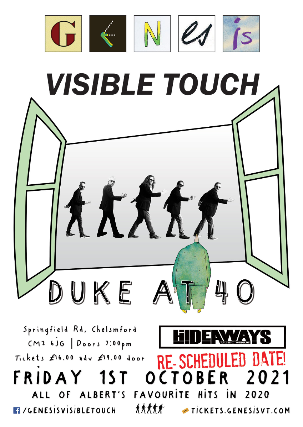 In 1980, Genesis released their iconic album “Duke”. To celebrate the 40th anniversary, GVT are touring in late 2020 performingmaterial from the album alongside hits and old classics.

Expect “Turn It On Again” and“Duke’s Travels” alongside hits like “Mama” and some old favourites for good measure!

A ‘must see’ show!”
(Dave Hutchins, Genesis’ engineer on The Lamb…) 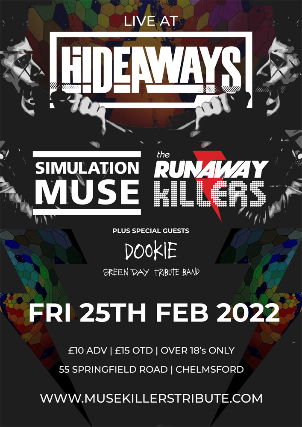 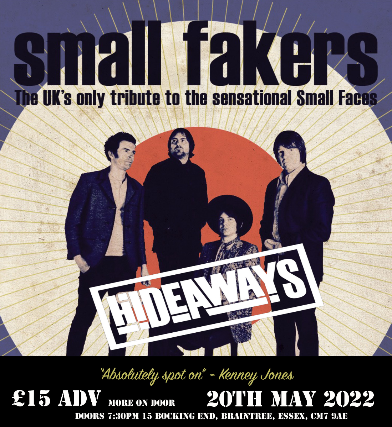 THE SMALL FAKERS - The NO.1 SMALL FACES show

The Small Faces are without any shadow of doubt, one of the most sensational British bands of the 1960s, and are as much a part of the soundtrack to the fabbest decade ever as The Beatles, The Stones, The Kinks, The Who, or anyone else for that matter!

Hitting the charts as teenage mods with their very first disc, 'Whatcha Gonna Do About It', the four diminutive Cockneys went on to release numerous timeless classics including, ‘Sha-La-La-La-Lee’, ‘Here Come The Nice’, ‘Itchycoo Park’ and ‘Lazy Sunday’.

The band are almost as famous for their groundbreaking psychedelic LP, ‘Ogden’s Nut Gone Flake’, which topped the UK’s album charts in 1968. Released a whole year before The Who’s ‘Tommy’, it’s widely regarded as rock’s very first concept album.

The Small Faces split in 1969. Lead singer Steve Marriott – recognised as having one of the greatest ‘blue-eyed soul’ voices ever – went on to have huge international success in the 70s with Humble Pie. The rest of the band – Ronnie Lane on bass, Ian McLagan on keyboards and Kenney Jones on drums – hooked up with Ronnie Wood (later to join The Rolling Stones) and Rod Stewart and had massive worldwide success of their own as The Faces.

Interest in The Small Faces never went away though, and was re-ignited by Jam frontman Paul Weller’s fascination with them in the late 70s, and again in the 90s by Britpop bands like Blur, Oasis and Primal Scream name checking them in interviews as a massive influence. More recently, bands like The Arctic Monkeys and The Kaiser Chiefs have declared themselves to be huge fans too.

But while fans of other great 60's bands had tributes to their heroes to see, to recreate the original live experience, The Small Faces were unrepresented. Until 2007 that is, when they got their very own tribute at long last - THE SMALL FAKERS.

There are only 100 early bird tickets available so be quick!

Ages 16 and up, any under 18's must be supervised by a responsible adult. 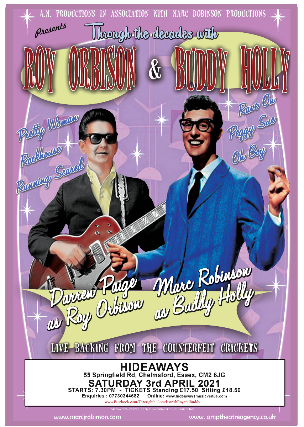 Due to The Corona virus outbreak this event will be moved to a later date of April 3rd 2021. All tickets purchased will be valid for the new date. Refunds available if needed. Please email info@hideawaysmusicvenue.com